Pre-eminent in the galaxy of Great: Gandhiji: His mission and message 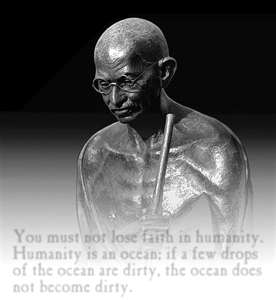 The most remarkable feature of Mahatma Gandhi’s personality was that he did not only belive in truth but tried to convince the people of its great value. As a leader he left a deep impress of his personality on the first half of the twentieth century by moulding the circumstances to his way of thinking. In both his struggles in South Africa and India, he tried to implement non violence at all stages.
Gandhiji was convinced that firm faith in God would help one in fighting the opposition in the world. His firm faith in lord Rama, was an important feature of his life. He saw great virtues in the Gita and he tried to mould and shape his daily conduct according to its principles. Another factor which influenced Gandhiji and moulded his ways of thinking was the sermon on the Mount in the Bible. Thoreau also impressed Gandhiji. Thoreau believed in cooperating with all that was good and non-co-operating with all that was evil.
Tolstoy’s philosophy has been termed ‘Christian anarchism’. He was of the view that all human problems could be solved by love. Tolstoy thought it a great crime if one tried to impose one’s will on others. He condemned violence. Gandhiji highly valued the role of Tolstoy in shaping his ideas. Both Gandhiji and Tolstoy believed in the search for truth. To Gandhiji, Truth and Non-violence were two forms of the same thing. Both Tolstoy and Gandhiji believed that before social uplift, self-improvement of an individual was necessary.
Satyagraha is Gandhiji’s greatest message. It was used by him in his non-violent campaign in South Africa and later on in India in the National Movement. It means truth-force, love force, or soul-force. It tries to impress upon the mind of the opponent a sense of justice without harbouring any ill-will towards the opposing party. Untruth is sought to be conquered by truth. To Gandhiji, this principle was eternal but ‘it was a science in the making’. The Buddha preached and practised it. It is found in the writings of Thoreau, Tolstoy and Ruskin.
Satyagraha was Gandhiji’s answer to social, economic and political evil of society. He practised it in his private life, and later on extended it to public affairs. He would always support the cause of the people, fighting injustice. He could never compromise with evil. He wanted to wage an all-out war against evil wherever it existed. Through non-violence, he led a dedicated life devoted to the service of humanity. By a non-violent struggle, his aim was to give relief to the individual from governmental suppression as well as freedom for the exploited and down-trodden nations.

Gandhiji’s religion was truth. Truth was God to him and non-violence was ‘his only way of attaining it’. A man’s motto should be the search for truth which can be pursued by doing services to all. Correct relationship to society, and political and economic freedom of one’s country fall under Gandhiji’s conception of truth. It includes political freedom of other countries also.

Satyagraha means that success can come only to truth and never to untruth. Truth exists while untruth does not. Gandhiji distinguished Satyagraha from passive resistance. Gandhiji interpreted ‘ahimsa’ in his own way. Ahimsa means absence of killing but to Gandhiji it was not injuring anything in this world in action, word or even in thought. A true follower of Ahimsa does not think ill of others.

Non-violence does not mean that one should merely submit to the will of the evil doer, in fact it means that one should love even the evil-doer. Under Non-violence , evil is sought to be won over by good; immorality is opposed by morality and physical force is challenged by soul-force and truth. It has great faith in the essential goodness of human nature. It is an effort to convert the bad to the good so that the evil doer also beco es conscious of his spiritual unity with the non-violent individual.

According to Gandhiji, self-realisation is the final goal of man. It means seeing God face to face and this can be done by following the path of non-violence and truth. He believes in the greatest good of all which is known as ‘Sarvodaya’ , i.e. welfare of all.

Non-violence implies love of other human beings and love is directly related to God and Truth. Gandhiji believed that there was no other God than truth, and to realise it one should develop the habit of loving even the poorest and the most inferior creatures in the world. This power comes to the non-violent man from God himself.

Gandhiji believed that a non-violent system could not come into existence in a society where there was a difference between the haves and have-nots.

To Gandhiji, truth was the highest law while non-violence was the highest duty. To him, soul-force is the strongest of all, and on its basis one can face and defy the whole world despite the fact that one is unarmed . The two most important rules to be observed by the followers of Gandhiji at Sabarmati Ashram were truth and Non-violence.

Gandhiji’s non-violence which is based upon truth-force and soul-force has got great importance in the life of an individual. An individual is normally faced with many problems in his life. According to Gandhiji when one follows the path of non-violence , these disappear. One should learn to love others and follow the policy of honesty.
Gandhiji also adopted satyagraha on the group and the national level. Non-violence is associated with peace and hence, under peaceful conditions tremendous progress is possible in this world. He desired non-violence to be effective and to be followed in thought and action. It should have bearing upon all the actions of one’s life.

Gandhiji held that the aim of the satyagraha is to convert the opponent and make him realise his mistake. The satyagrahi should not depend upon physical and brute force, I,e. in his action, thought or speech there should be no scope for violence on the part of the opponent. Gandhiji thought that one of the best weapons of a satyagrahi is non violent non-co-operation.
Gandhiji was convinced that non-violence could be very effective in the group and national life too. In India Gandhiji, by his charismatic leadership, brought the classes and the masses under the influence of this policy against British colonialism. In society , a mass, non-violent struggle against injustice is necessary. Gandhiji however says that in a well-ordered state, occasion for civil resistance would be rare.

Gandhiji advocated the adaptation of non-violent approach in the relations among nations. Non violence is based upon the fundamentals of life and if it can be practised in individual life, it can be very well done in the relations among nations. The mentality of people in the world should be geared towards peace. There should develop a genuine desire to live in peace. If all the nations of the world voluntarily adopt the path of non-violence , the world would become a better place to live in.
If one of a few nations renounced war as an instrument of national policy and resorted to disarmament voluntarily, it would be found that permanent peace could be established in the world.
Thus, Gandhiji tried to make the use of non-violence universal. He showed humanity that it was the strongest weapon capable of being used by every body in every sphere of life. Gandhiji’s mission was to educate the people in non-violence and introduce the element of morality in the individual, national and international spheres.